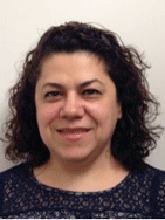 Florencia (Flor) Ardon was born in the heart of Mexico, in a beautiful colonial city, Queretaro, which was honored as a World Heritage Site by UNESCO in 1996. She studied Animal Science in her hometown, but after a few years working in the private sector she moved to Germany for graduate school, where she specialized in animal reproduction. Flor's dissertation earned her the annual "Joachim und Irene Hahn Young Researcher Award."While in Germany, she met and married her husband, who is originally from Oklahoma, and after her PhD they went to live in Mexico for five years as Flor worked first on a postdoc in a very rainy city in central Mexico, and then as a university professor in a city located in the desert, on the border with California. They moved to Ithaca in 2010 with their two children where Flor started her career at Cornell as a researcher, working as a postdoc at the College of Veterinary Medicine for four years. As a researcher, Flor published several peer-reviewed articles, was a member of the Society for the Study of Reproduction, and was inducted into the Edward A. Bouchet Graduate Honor Society in 2014. However, since Flor really enjoys interacting with students on a daily basis, and believes her skills and life experience can be useful to Cornell undergrads, she decided to transfer to a position outside research, and has been working as the advisor for the Office of Internal Transfer and Concurrent Degrees since October of 2014.In addition to her current position, Flor participates in outreach by volunteering as a Spanish translator for the project "Celebrate Urban Birds" at the Lab of Ornithology, blogging about human reproduction and autism, taking part in different activities as a member of the Latino Civic Association and of the Ithaca Special Education PTA. Flor enjoys walking through our gorges, trails and parks with her family and feels right at home in Ithaca. 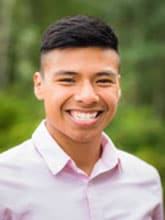 Iván Solís Cruz calls Chicago, Illinois his home which is where most of his family resides.  Iván took the opportunity to attend Ashford University in 2011 where he completed his bachelors of science in biology.  Soon after graduation he moved to Vermont and New Hampshire where he focused on conservation work and outdoor education primarily working with youth.

In 2016 he attended Southern Illinois University Edwardsville (SIUE) to pursue his M.S. Ed. in College Student Personnel Administration.  While at SIUE he collaborated with multiple folx to further support students of color on campus and undocumented students.  Upon completing his degree from SIUE, he moved to Fairbanks, Alaska where he worked at the University of Alaska Fairbanks as a Residence Director.

Iván’s current role at Cornell University is the Residence Hall Director for Low Rise 6 & 7, a first year community.  Iván is looking forward to learn more about the culture at Cornell, work with students to understand their needs and continue to support students and communities from underrepresented identities. 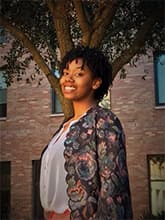 Jallissa is a first-generation graduate. She received her A.S. in Psychology with an emphasis in science from Northeastern Junior College. Then received her B.A. in Africana Studies and Psychology and M.A. in Higher Education and Student Affairs Leadership from the University of Northern Colorado. Prior to coming to Cornell, Jallissa worked in cultural services as the Program Coordinator for the Marcus Garvey Cultural Center, a member of a Multicultural Greek letter sorority, Pi Lambda Chi Latina Sorority Incorporated, hosts workshops on identity, goal setting, activism, and the mensural cycle.

Currently, her role at Cornell is the Residence Hall Director (RHD) for Ujamaa, a first-year community on Cornell's North Campus. Jallissa's passion is to develop and create ways for students who hold marginalized identities to have positive experiences in higher education through access, retention, and policy. 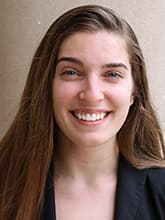 Jazlin moved from the sunny Tampa Bay area in Florida to Ithaca in 2012. She studied inequality through majors in Sociology, English, and Performing and Media Arts as an undergraduate (‘16), and continued her studies in Human Rights and Social Justice throughout the MPA program at the Cornell Institute for Public Affairs(‘18). In her time as a student, she was active in social justice, dance, and theater communities and was a proud member of Ordinary People Social Justice Theater Troupe, Teatrotaller, and Sabor Latino. Jazlin also struggled as a student with imposter syndrome, a lack of direction, time management, and the lack of good Cuban food in Ithaca. She looks forward to meeting with and supporting students who might be facing similar issues.

Jazlin now works for the Intergroup Dialogue Project, which uses dialogue to communicate across differences of identity, experience, and opinion. Jazlin has been a facilitator, coach, curriculum developer, and student engagement coordinator. She recently completed her MPA in Human Rights and Social Justice at the Cornell Institute for Public Affairs. In her new position as the Intergroup Dialogue Pedagogy Specialist and Lecturer, Jazlin will continue the development of IDP’s main academic offerings, and will co-teach the following courses:

Additionally, Jazlin will develop and lead ongoing trainings for graduate and undergraduate student facilitators, and will further collaborations with programs, departments, and institutions on campus. 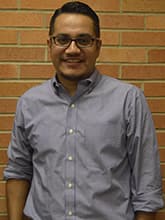 Jessie grew up in the rural community of Decatur, Texas just northwest of the Dallas-Fort Worth metroplex. Upon graduating from high school he attended the University of North Texas and received a Bachelor of Arts in Radio, Television and Film. Shortly after, he began working at FUNimation Entertainment- a Japanese animation company, as a video editor for roughly ten years. While working at FUNimation, he volunteered with various marginalized populations and was learning to become a servant leader. He moved to Minnesota to follow his passion in serving others and continued his education by receiving a Bachelor of Arts in Political Science and Masters of Arts in Educational Leadership from Winona State University. He began working in higher education to create awareness for the historically marginalized populations in southern Minnesota.
Jessie continues to learn more about others as they share their own narratives and he shifts his paradigm. Jessie serves as Associate Director of Multicultural Affairs in the School of Industrial and Labor Relations. He will be a critical part of the Student Services team that advises and supports all ILR students. 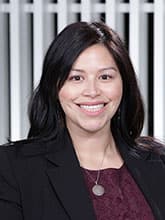 Cindy Mosqueda was born and raised in Los Angeles. She earned her B.A. in Chicana/o Studies and Sociology from the University of California, Los Angeles. As an undergraduate, Cindy was heavily involved in MEChA de UCLA and student government.

Cindy has dedicated her career to serving underrepresented students in higher education, specifically in STEM fields. Following college, she served as the Cihuacoatl (Director) of MEChA Calmecac, a student-initiated and student-run retention program serving Chicana/o and Latina/o students at UCLA. This cemented a desire to effect change on a broader level and go back to graduate school. Cindy earned a M.A. in Education with a focus on Higher Education and Organizational Change from the UCLA Graduate School of Education & Information Studies. As a graduate student, she studied issues of diversity and access in STEM fields.

Prior to joining Diversity Programs in Engineering as the Associate Director, she coordinated academic support and research programs for underrepresented students at the UCLA Undergraduate Research Center-Sciences. In her current role at DPE, she directs the LSAMP Scholars Program and CU-LSAMP Summer Research Experience for Undergraduates, the Engineering Summer Math Institute, the CURIE and CATALYST Academies for high school students, and advises the American Indian Science and Engineering Society and National Society of Black Engineers.

Cindy is passionate about issues of access to higher education, broadening participation in STEM fields and creating an inclusive campus atmosphere for traditionally underrepresented students. When not working, she enjoys reading, writing and spending time with her family and adjusting to life in Ithaca. 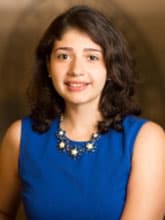 Catherine Ramírez was born and raised in New Jersey.  She is a first generation graduate and the first in her family to be born in the US. She obtained her A.A. in Education from Brookdale Community College, B.A. in Psychology and Spanish and her M.Ed in College Student Affairs from Rutgers University-New Brunswick. She has experience in advising student organizations, creating workshops for first-generation college students,  planning large-scale community service events, and teaching a seminar for transfer students.  Catherine joined Cornell in 2015 as the Residence Hall Director for the Latino Living Center and Residential Liaison for the Prefreshman Summer Program (PSP).  In August 2018, she transitioned to Advising Dean/Senior Academic Advisor for the College and Arts and Sciences, working closely with first-year students and sophomores. In this role, she will also be advising HEOP students and working with PSP as one of the college associates. She is dedicated to supporting students through their developmental journey and on their path to graduation. 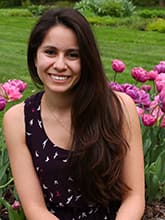 Natasha Steinhall '14 grew up in Denver, Colorado and moved to Ithaca in 2010 to study Animal Science at Cornell. As a first-generation student at an Ivy League, Natasha struggled to find her “calling” for most of her undergraduate career. Natasha didn’t discover the Intergroup Dialogue Project until the first semester of her senior year when she took EDUC 2610. It changed her life and gave her direction, and she went on to facilitate a section of the course in her final semester and twice more after she graduated. In 2017 she joined the IDP team full time as the program assistant. Natasha also volunteered as a tutor with Tompkins Learning Partners helping ESL adults prepare for their US citizenship tests. Natasha loves meeting and engaging with people from different backgrounds than herself. She is also passionate about spreading the magic of dialogue as she has seen and experienced its transformative effects first-hand. Natasha also enjoys exploring the fantastic world of food and beverage and hanging out with dogs and people.

Natasha discovered the Intergroup Dialogue Project in her senior year at Cornell. She went on to facilitate the course and continued to be involved with the program after she graduated, first as a facilitator, and later as the program assistant. In her new role as the Program Coordinator, Natasha will be responsible for the day-to-day management of operational areas of the program, as well as developing and implementing operating procedures and practices. She will identify programmatic trends and new opportunities and assist in their development and will oversee communications and public relations efforts. Additionally, Natasha will manage the development and implementation of technological tools for teaching and learning.

Simon is a McNair Scholar graduate of Boise State University where he earned a B.A. in Political Science and Economics. He earned an M.A. at Cornell University and is a Ph.D. Candidate in its Department of Government. His research explores indigenous social movements and their relationship to natural resource extraction, particularly in hydrocarbon rich Amazon. His research took him to some of the most remote regions of Bolivia and Ecuador, where he lived for over two years. At Cornell he served as graduate teaching assistant for Comparative Politics, International Relations, Comparative Politics of Latin America, Latin American Social Movements, and Sports and Politics in American History, as well as for a Spanish-speaking section of Latin American Politics. Simon was born into a migrant farmworker labor camp outside of Caldwell, Idaho but grew up mostly along the US-Mexico border in Texas’ Rio Grande Valley. He has served the city of Ithaca on the Greater Ithaca Activities Center’s (GIAC) Board of Directors, as a certified New York State firefighter, and working with at-risk youth. He enjoys basketball, running trails, singing while driving and cooking, and coaching youth and adult boxing at GIAC.