La Asociación Latina commemorated the 25th anniversary of the 1993 Day Hall Takeover on Nov. 16, 2018 as a part of the Latino Living Center's Café con Leche series. Students, student leaders, staff, faculty and administrators embarked on an honest conversation of why the four-day occupation of Day Hall occurred and what its lasting effects were.

Drawing students to the front of Day Hall, this year’s event began with participants reading off the same list of demands that were read during the four-day student occupation in 1993. Following the demands, participants marched to the Latino Living Center to join other students and faculty in a conversation about the racial injustices that led to the protest. The student occupation was motivated by the vandalism of Chicano artist Daniel J. Martinez’s artwork, which was on display on the Arts Quad. Vandals ruined Martinez's work, which challenged the privilege found at places such as Cornell, by writing a string of ethnic slurs onto the exhibit.

After the vandalism was uncovered in 1993, students from Cornell’s Latinx student organizations gathered and rallied in Day Hall, refusing to come out until President Frank Rhodes agreed to host a public forum to discuss their demands. The event was inspired by and reminiscent of the 1969 Willard Straight Takeover led by black student activists. After four days, President Rhodes agreed to host a public forum to hear student demands, and as a result, the Latino Living Center was established and the Latino/a Studies Program was expanded. 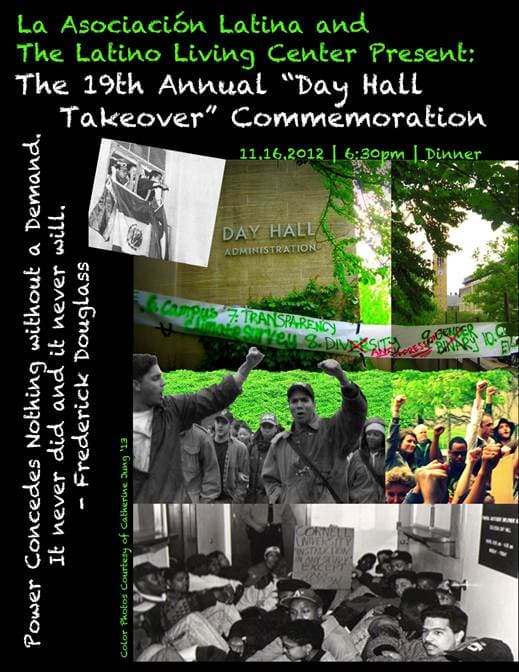 The 1993 occupation called for the humanization of Latinx students at Cornell and the impact of its successes are still felt today. The Latino Living Center’s main lounge, where the event’s discussion took place in, was gifted an art piece in 2004 by Yasmin Hernandez, a participant in the occupation. It is a collage of various press clippings from across the nation documenting the event and a painted image of students occupying the building. The art piece, much like the building itself, is a representation of the fight students have had to undertake to secure equal and fair resources.