Faculty experts looked at current and historical migration and refugee issues from local, national and international perspectives, and the impacts for Cornell from potential immigration policy changes, at a forum June 10 in Statler Auditorium as part of Cornell Reunion 2017.

International students comprise nearly half of Cornell’s graduate and professional student population and 11 percent of the undergraduates, and “these issues are important to them,” said moderator Barbara A. Knuth, senior vice provost and dean of the Graduate School.

She said students, faculty and staff have posted the slogan “Any person, any study, from any country” across campus in recent months, as a topical enhancement of the Cornell founding motto.

After noting that it was his birthday as well as his 40th reunion, professor of immigration law practice Stephen Yale-Loehr ’77, J.D. ’81, began by discussing the drivers of migration. He showed maps and figures and pointed out that worldwide migration spiked in 2015, led by massive movement from Syria, Afghanistan and Somalia to other countries.

Most refugees currently admitted to the United States are from the Democratic Republic of the Congo, Burma and Syria, he added.

Traditionally, the president and Congress set the number of refugees the U.S. will accept each year. “We cannot send them back to a country where there’s a well-founded fear of persecution,” he said.

Sergio Garcia-Rios, assistant professor of government and Latina/o studies, said immigration has been a multidimensional issue throughout history. He showed a timeline of immigration to the U.S. from the 1850s, when about 4 million people entered the country, through 2000, when immigration peaked at 10 million.

“By the 1960s, Mexico was the top sender,” Garcia-Rios said. Mexican immigration peaked in 2006 and has dropped off since. Currently we are seeing “net zero migration” from Mexico, he said, with those returning about equal to or slightly more than those entering the U.S.

“Only about 14 percent of those going back to Mexico are being deported” and most of them voluntarily go back, he said. “They want to be with their families.”

Shannon Marie Gleeson, associate professor of labor relations, law and history, said we are in an era of “the largest immigration enforcement in U.S. history,” affecting all immigrants, with about 400,000 removals a year and 34,000 held in detention in 2016 alone.

“There are a number of concerns for international students,” she said, including “fear for their families,” the long-term viability of Deferred Action for Childhood Arrivals (DACA) status and other “ongoing challenges for undocumented students.” Cornell student services have started addressing such issues as “travel restrictions, housing needs and continued access to legal aid.”

National policy implications of concern for academic staff include pending changes to regulations for those with H-1B nonimmigrant work visas, less data transparency at the federal level, and threatened cuts to major research funding, she said.

Gleeson pointed out current Cornell research on immigration, mobility and inequality in the ILR School, the Center for the Study of Inequality and the Cornell Population Center; a migration scholar network in the Institute for the Social Sciences and an immigration and migration working group in the Mario Einaudi Center for International Studies. These faculty efforts, as well as a Law School clinic assisting people affected by policy changes, the Cornell Farmworker Program and the Cornell Coalition for Inclusive Democracy, all “support Cornell’s responsibility to fulfill its public mission,” Gleeson said.

Answering a question on the value of immigration, Yale-Loehr cited a 2016 study by professor of industrial and labor relations Francine Blau ’66, as chair of a National Academies of Sciences, Engineering and Medicine report “that looked at immigration from a macroeconomic perspective – and found that immigration is a net benefit. Everyone benefits, incrementally or a lot, by the presence of immigrants in the U.S.”

An example: “Our law firm represents a lot of doctors around the country, and in [some areas of] upstate New York there are not enough U.S. doctors willing to work in rural hospitals. So we help foreign doctors to … stay here so that they can serve upstate rural communities.”

Panelists also answered audience questions on current policies and the complications of migrating to the U.S. and crossing its borders.

Yale-Loehr said the courts rather than Congress might intervene on immigration policy changes and limits to the number of refugees admitted to the U.S., but the president could enact other measures. For example, he said, the State Department has a new form for visa applicants with questions about their recent social media usage and travel in the last 15 years.

Garcia-Rios, a native of Durango, Mexico, considers El Paso, Texas, his second home. “We see a binational dynamic at the border,” he said. He would cross the border daily from Juarez during his first year at the University of Texas, El Paso, and after moving to El Paso he would often cross back to Mexico to visit family and friends or for a meal.

“Now I see a change that is more restrictive. A community that used to be binational is disrupted,” he said.

“We already effectively have a wall, just not a physical wall,” Yale-Loehr added.

“Immigration, Migration, and Refugee Policies Under the New Administration” was presented by the Einaudi Center and Cornell Mosaic. 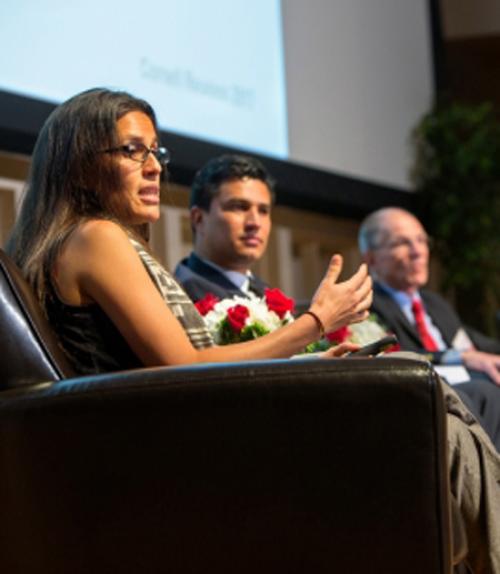 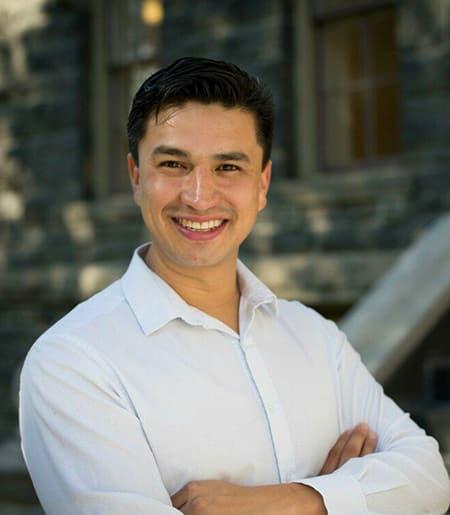