Garcia, the Howard A. Newman Professor of American Studies in the College of Arts and Sciences, spoke to policymakers in Washington, D.C., Oct. 1 in a briefing sponsored by the National History Center. The briefing drew attention to how the past can inform the current debate over refugee admittance, centered on the recent announcement by the Trump administration that the refugee cap would be lowered to 30,000 in the new fiscal year. That’s down from 45,000 the previous year and the lowest since 1980.

Kraut introduced the briefing by linking the current political context to history. “As the political storms rage over the refugee issue,” he said, “we might well turn to the past for a clearer understanding of how we got to where we are, and shining the light of historical perspective can only help.”

Garcia said geopolitics shaped how refugee visas were distributed in the 20th century, and that during the Cold War, the majority of refugees admitted to the U.S. were from three countries: the Soviet Union, Vietnam and Cuba.

“When the Cold War ended, anti-Communism ceased to be the lens through which we interpreted who was most needy of humanitarian protection,” she said. “Policymakers began considering wider populations of those eligible for the coveted refugee visas: those affected by civil war, unrest, genocide, gender discrimination and religious persecution. Since the Cold War era, the U.S. has admitted refugees from more countries than ever before.”

According to Garcia, the federal government has been presented with a number of challenges pertaining to refugees since the ending of the Cold War, and especially after 9/11. One such challenge is the rising number of asylum seekers compared to refugees. The difference, she said, is that asylum seekers request protection on U.S. territory, whereas refugees usually begin the process at embassies, consulates, or in camps closer to their home country.

“How do we respond to the growing number of people looking for asylum on U.S. territory, and how do we reconcile humanitarian responsibility with domestic concerns for national security?” Garcia asked. “Since the 1980s, petitions for asylum have increased exponentially. In March 2018, we had close to 900,000 open asylum cases, but on average admit just 25,000 asylum seekers each year.”

Another challenge is security, particularly since 9/11 and the beginning of the “war on terror.”

“There is great fear of accepting refugees from certain parts of the world, areas considered to be incubators of terrorism,” Garcia said. “As a result, the burden of proof is higher for refugees and asylum seekers, and the hoops they need to jump through are now more difficult. Even if they can satisfy the requirements, less than one percent of refugees worldwide are admitted to top resettlement nations like the U.S., Canada, the United Kingdom and Australia. Americans are under the impression that if refugees wait long enough they will be admitted, but that is simply not how the system works.”

The number of refugees is expected to grow, Garcia said, especially as a result of accelerating climate change, which acts as a threat multiplier, exacerbating political conflict. Her current research is on climate-driven migration, stemming from the discovery that many of the refugee populations she was studying were initially displaced by an extreme weather event that forced them to move.

“In the absence of a more robust resettlement program, aid to organizations like the United Nations High Commissioner for Refugees has become all the more important. But even aid can only do so much,” Garcia concluded. “Some refugee camps are larger than U.S. cities, and their long-term impact on countries and regions will have an impact on our foreign policy as well.” 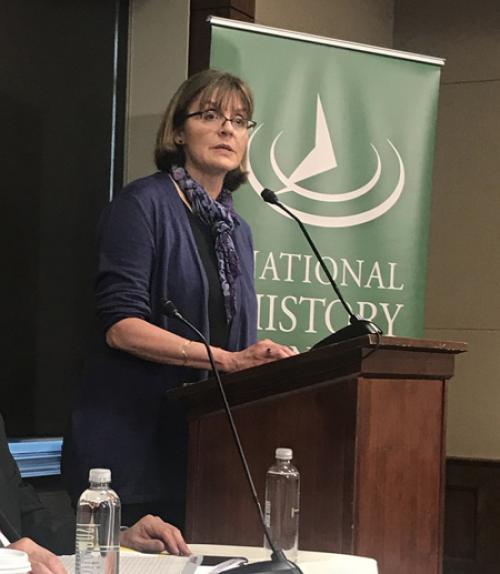