Reunion is a time to see old friends, discover the changes on campus, visit favorite spots around Ithaca – and to catch up on what’s been happening in the College of Arts & Sciences since graduating. For those attending Reunion 2016, the College has put together a wide array of activities to tempt young and old. Here are some highlights:

Jewish Studies at Cornell, Today and Tomorrow
Jewish culture, experience and literature are shaped by and have helped to shape a vast range of human worlds, from the ancient Near East, to medieval Iberia, to Europe and America in the Age of Revolutions, to 21st century Latin America and Australia. The dynamics of culture and belief in the Western hemisphere have been shaped in large part by the tense and productive encounters between Jewishness and Christian and Islamic formations. Dean Gretchen Ritter ‘83 will moderate a panel with Jonathan Boyarin, Mann Professor of Modern Jewish Studies and Paul and Berthe Hendrix Director of Jewish Studies, and Kim Haines-Eitzen, Professor of Ancient Mediterranean Religions, looking at some of the many ways research and teaching at Cornell engage this dynamic legacy.
Friday, 10-11 a.m., 120 Physical Sciences Building,

Black Holes and Gravitational Waves: Was Einstein Right?
This past February, the Laser Interferometer Gravitational-Wave Observatory (LIGO) experiment announced the direct detection of gravitational waves from a pair of orbiting black holes — one of the most exciting scientific discoveries of the past 50 years. Saul A. Teukolsky, the Hans A. Bethe Professor of Physics and Astrophysics and one of the winners of the $3 million Special Breakthrough Prize in Fundamental Physics for the discovery, will explain what gravitational waves are and how they were detected. He will also describe the role of Cornell researchers in establishing that the waves did in fact come from black holes, and how this experiment confirms that space and time are distorted by strong gravity, just as Einstein predicted.
Friday, 1:30-2:30 p.m, Rhodes - Rawlings Auditorium, Klarman Hall.

Favorite Physics Demonstrations
Alumni, family and friends are invited to view and participate in educational lecture demonstrations by the physics faculty. Explanations are designed for all ages and hands-on demonstrations will be available. Refreshments will be provided.
Friday, 2–3 p.m., Schwartz Auditorium, Rockefeller Hall

Breakfast with the Dean
Alumni, family and friends will have the opportunity to hear Dean Ritter’s remarks and to ask her questions in a relaxed, informal setting during this continental breakfast.
Saturday, 8:30-9:30 a.m., Groos Family Atrium, Klarman Hall.

Big Ideas in the Humanities: Sound
Jeremy Braddock, associate professor of English, and Trevor Pinch, Goldwin Smith Professor of Science & Technology Studies, will bring a critical perspective to our understanding of ourselves and our world in relation to the topic of “sound.” Pinch will discuss the newly emerging interdisciplinary field of sound studies, one of the most cutting edge areas in the academy. He’ll explore why sound has been neglected in comparison to the visual dimension and how that has changed. Braddock will share his research on the Firesign Theatre, a comedy group from the late 60s and early 70s that took the stereo LP album as their principal medium.  He’ll describe how their collaborative mode of writing seized upon the possibilities of multitrack recording, and other technological innovations, that transformed the recording industry during the years of the group's contract with Columbia Records.
Saturday, 2:30– 3:30 p.m., Rhodes - Rawlings Auditorium, Klarman Hall. 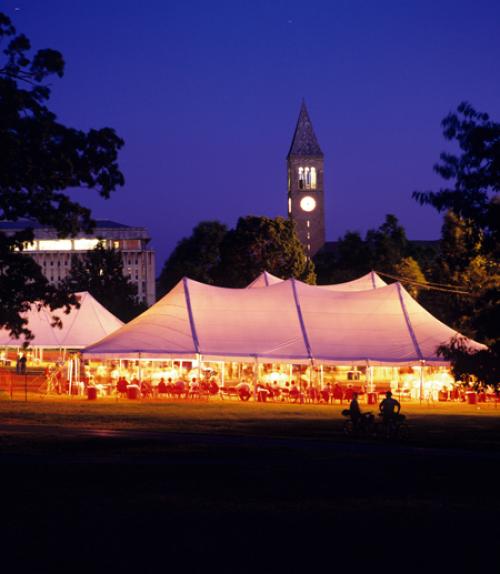