A new play about borders has found an unusual way to transcend them: by integrating local experiences in each new place it is performed. When it travels Aug. 26 to Akwesasne, the Mohawk Nation territory divided by the U.S.-Canada border, the script will incorporate stories of local Mohawk people, some of whom will join the cast.

“Root Map,” an international collaboration between Cornell University’s College of Arts and Sciences and Jadavpur University in Kolkata, India, interweaves stories from different cultures to explore the similarities people experience when encountering borders. It had its inaugural performance Jan. 27 in Kolkata, India, followed by performances in Ithaca, New York, and El Paso, Texas. In each city, local actors join the production, contributing new material to the script that reflects their experiences with borders.

“The script is dynamic,” explains Abraham Francis, a member of the Mohawk Nation and a Cornell graduate student. “In the Akwesasne production, our community, our elders and our youth, the people who hold these stories of pain and struggle with the border, will be expressed in relationship to those other stories in ‘Root Map,’ and the script will be modified to situate it within Akwesasne.”

The collaborative play includes academics and artists with diverse cultural heritages across Asia, Africa, Europe, North America and South America. The Akwesasne production will include actors from New York and Kolkata. In addition to Francis, graduate students Samuel Bosco and Jayme Kilburn will travel to Akwesasne to perform.

Several intensive theater workshops with the local cast will be held at Akwesasne in August to gather material for the script and to familiarize the local actors with the production. The workshops will also cover improvisation, masks and other theater elements included in “Root Map,” according to producer Debra Castillo, director of Cornell’s Latina/o Studies Program, the Emerson Hinchliff Chair of Hispanic Studies and professor of comparative literature.

All the stories in “Root Map” are firsthand or from family members, said Rosalie Purvis, a doctoral student in Cornell’s Department of Performing and Media Arts, who served as primary writer of the play. During the initial writing process, which included the entire cast, “we kept finding more and more commonalities in the tropes and images even though our experiences were in different landscapes and cultures,” she said.

The stories the collaborators contributed are deeply personal. Francis grew up in Akwesasne, living in a nation divided by the U.S.-Canada border. Purvis is the granddaughter of Holocaust survivors and grew up partly in the Netherlands. Carolina Osorio Gil, Latina/o studies engagement coordinator at Cornell, came to the United States from Colombia when she was 4 years old, crossing the U.S.-Mexico border illegally (she is now a citizen). Despite difference experiences, crossing borders is a shared aesthetic, noted Purvis.

Osorio Gil pointed out that not everyone dealing with borders is a migrant. Like many other indigenous communities, Akwesasne has been divided by war and politics, and residents must deal with border agents on their land on a daily basis. “Borders are arbitrary. People don’t cross borders, borders cross people,” said Osorio Gil.

Because the play incorporates nine languages, the music is an important component of the production. Originally written in Kolkata, the music will be reinterpreted by musicians in Akwesasne for the production.

“Our goal for the play is for it to supersede language,” Purvis said, noting that meaning is communicated through music, gesture and emotion.

“In migration, we’re all exposed to languages we don’t understand, so the audience will encounter words they don’t understand. That’s an important part of the experience.”

Linda B. Glaser is a staff writer for the College of Arts and Sciences.

This article also appeared in the Cornell Chronicle. 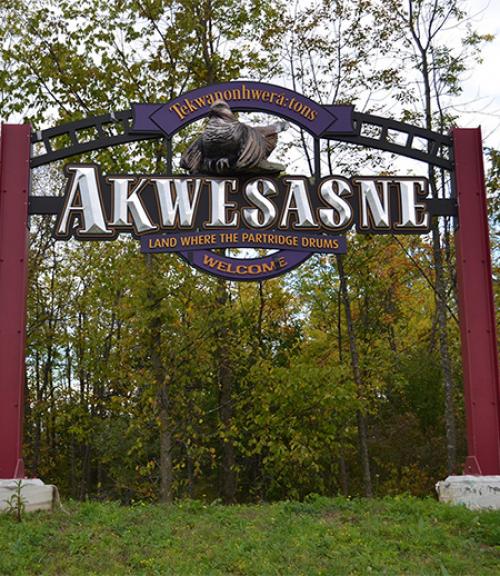