For the 15 students in a new interdisciplinary class this semester, the murals common throughout East Harlem have deeper meanings than passersby might realize.

The students, taught by assistant professors Ananda Cohen Suarez, history of art, and Ella Maria Diaz, English and Latino studies, studied the murals all semester and presented their research at a Dec. 4 event unveiling their exhibition, “Visualizing El Barrio,” in the Latino Studies Program offices on the fourth floor of Rockefeller Hall.

Cohen Suarez, who lived in New York City during graduate school and admired the murals of East Harlem and the stories behind them, had the initial idea for the course. She and Diaz conceived it as a means of bridging their mutual interests in Latin American, Latino and Chicano art and literature.

Students in an interdisciplinary class studied murals in New York City's El Barrio, learning about neighborhood aspects such as culture, history and preservation, and organized a new campus exhibit.

“We facilitated field trips to view new Latino murals in Ithaca for our students, toured the student murals at the Latino Living Center, and learned about the Day Hall takeover and the Johnson Museum exhibit, ‘Revelaciones,’ curated by Chon Noriega in the 1990s,” she said.

Known as El Barrio, East Harlem is a traditionally Latino neighborhood that is home to one of New York City’s largest Puerto Rican communities and has experienced gentrification in recent years.

“Murals originated as a way of empowering communities,” Cohen Suarez said. “These original murals exist alongside many new murals that are being produced and others that have been whitewashed. This course has explored the push and pull between permanence and ephemerality in the urban landscape.”

To prepare for an Oct. 25 field trip to New York City to view the murals and talk with residents and artists, students studied literature, architecture, history, preservation efforts and the artistry of the culture and the community.

The class attracted students from diverse majors. “Having everyone come from a different background and perspective was important to the process,” said Morgan Walsh ’16, a history of art major. “The artists in our class talked about the mural techniques, architects explained how the buildings were designed, and English majors could talk about the history of Latino poetry.”

Walsh focused her final project on artist James de la Vega ’94’s “Homage to Pablo Picasso,” incorporating a scene from Picasso’s “Guernica,” depicting gruesome suffering after Germans bombed the Spanish town of Guernica during World War II. De la Vega added playful elements to the painting such as Yankees helmets and fire hydrants, and Walsh thinks the work might serve as a reflection on the modern-day violence that takes place throughout low-income communities.

English major Spencer Holm ’16 chose a mural of Latino rapper Big Pun,  who died in 2000 and is immortalized at the corner of 103rd Street and Lexington Avenue.

Holm researched photos of the mural in advance, but was surprised to find that Pun’s face had been whitewashed since the photos were taken. He and others spoke with community members, including a local bookstore owner, about the harmful impact of whitewashing.

“The bookstore owner said, ‘unless you know the undocumented backstory of a whitewashed mural or storefront, history fades,’” Holm said. And most of these murals aren’t well documented.

Walsh said the class had made her appreciate all sorts of public art that she might have ignored before. Holm said the interdisciplinary nature of the course made him familiar with “the artwork, culture, politics, economy and conflicts of those streets.”

Cohen Suarez said the class structure and collaboration allowed students to explore the course material in greater depth than in a traditional class.

“A typical history of art class focuses on slides and lectures,” she said. “So this course inspired us to completely re-conceptualize how and where learning can take place.” 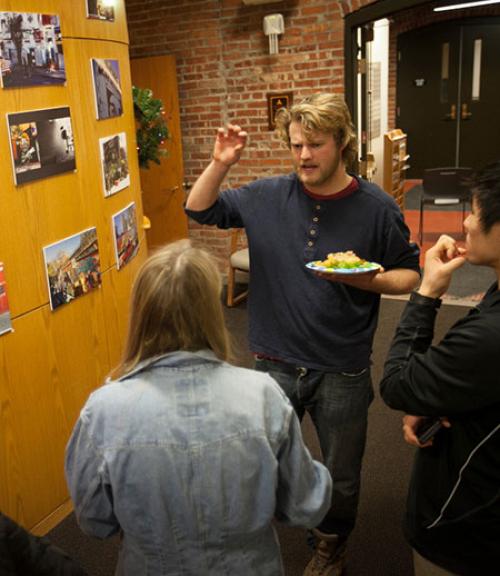