Ruby Rhoden ’17 expected her arrival at Cornell would be like landing on a new planet, with everything from the social environment to the academics substantially different from where she came from.

Rhoden attended an impoverished high school in New York City, where she says the average grade at the school was “C.” Despite receiving a full scholarship to Cornell, she was nervous about how she would handle an atmosphere so dramatically different from her high school. “I was concerned about keeping up with the workload and also making friends. I realized I have a really hard time doing that,” said Rhoden, who spent this summer as a program assistant with Cornell’s Prefreshman Summer Program (PSP). “So how am I going to do this in the Cornell environment?

For first-generation students, students of color and students from low-income backgrounds, stepping onto the campuses of elite schools like Cornell can be a culture shock, with everything from the workload to the weather drastically different from what they’d grown up with.

The challenge for schools like Cornell is convincing these smart and accomplished students that they do, in fact, belong here.

That’s why Cornell created PSP, where students from different backgrounds and ethnicities come together for classes and enrichment programs to bridge the gap between their high school and college experiences.

During the six-week program, participants take college-level classes, some for credit and some that fulfill college requirements; other classes strengthen their skills in a particular area, such as writing or chemistry. Participants also learn about the many support resources available at Cornell.

Students who would benefit from PSP are identified by admissions staff during the application process. Some students are invited to participate. For others – including students attending Cornell through the government-funded Educational Opportunity Program or the Higher Education Opportunity Program – participation is required.
“When I came to PSP I was really scared about college,” said Belan Antensaye ’18, a program assistant at PSP and past participant. “I’m a first-generation student, and I didn’t know a lot about what it would be like.”

While PSP prepares students for the academic rigors of Cornell, it also gets students ready for the other developmental markers that define the college experience, Antensaye said. “Just getting to know my own identity through PSP [was important], and the program offers a lot of activities for that. It’s not only academic; it’s really about figuring out what you want to do, where you’re coming from and where you’re going – the things that are kind of hard to delineate.”

One of PSP’s most important benefits is that students build a community of peers before they step on campus in the fall.

“Being [at PSP] definitely gave me a sense of community,” said Rhoden. “Going from PSP to campus where you have 3,000 freshmen, I already knew 200 people. So I had that community.”

Karen Loya ’19, a PSP participant this year, said the size of the program allowed her to build important connections and understand where to get support.

“It’s only 190 kids, so we really get to experience a support system not only from the other students around us but especially from the staff and the [program assistants], the current students,” Loya said. “One of my fears was not being able to find help when I needed it because I know in college you’re supposed to ask for help. So this is a really perfect introduction to where to find help, who can help you with what and who you need to get to know.” 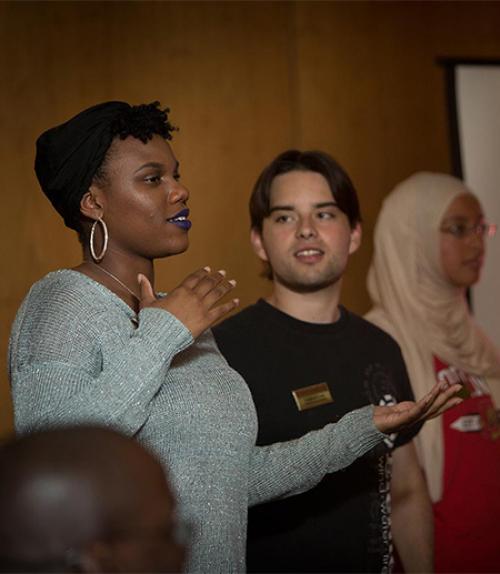