A Cornellian in the College of Arts & Sciences has been elected to the Ithaca Common Council.

Jorge Defendini ‘22, a senior majoring in government and American studies and minoring in Latino studies, started his term in January serving the Fourth Ward, which contains parts of Collegetown and West Campus. Defendini ran as a Democrat, as a member of the Working Families Party and as a member of the Solidarity Slate, an independent political organization.

Defendini, who hails from Queens, calls himself a democratic socialist, and said he would build grassroots movements to bring “radical” political ideas into the mainstream, having been inspired by his work on Rep. Alexandria Ocasio-Cortez’s campaign for Congress in 2018.

One of his chief issues is housing reform. Because Ithaca is over 70% renters, he believes that tenants ought to have more power when it comes to policy making.

I recently had the opportunity to sit down with Defendini and discuss his priorities.

Q: Why is housing reform such an important issue to you?

A: I'm a big proponent of the belief that housing is a human right, meaning that people are entitled to have a home that is not substandard, that is of quality and that they have access to. Ithaca has a population of 73% renters; in Collegetown, that number is 93%.

Unfortunately, our city government's policy doesn't reflect that. So I'm running as a tenant on a tenant platform to deliver on housing reform, and reimagine what adequate, affordable, accessible housing looks like in the city.

The first thing that we're trying to do is pass the right to renew leases. Good-cause eviction is the term and in Ithaca and in New York State right now, there are three ways you could be evicted: not paying rent, being a nuisance tenant or not having your lease renewed.

This leads to situations where people feel insecure in their own home, when they're renting, because people are afraid to ask landlords to do their jobs, make repairs, and things of that regard because they're afraid they won't get their leases re-signed. And non-renewal is a way that landlords can discriminate on the basis of housing. Without having to sort of explicitly say, "I'm kicking you out of this house, because you are a person of color, you are of the LGBTQ+ community or you're just poor" and instead of this, they just simply say, “I'm not renewing your lease.” So I believe that it's about time for us to catch up and pass this. That's priority No. 1, for me.

Q: How would you deal with landlords who aren’t taking care of their properties?

A: For slumlords who are letting their properties rot, there have been a lot of properties that have been coming under question because there's been asbestos, black mold, all these types of things, where the housing quality is substandard to the point where it's unlivable or dangerous for tenants. If they've proven that they are a repeat offender and that they can't maintain quality housing, I think we need to start looking at things like eminent domain and they need to no longer be renting out these dangerous liabilities and hurting tenants just because they have extra property. This is not going to stand in Ithaca while I am in office.

Q: Talk to me about the Green New Deal. In your ideal world, what would the actual laws and social programs look like?

A: I'm a big supporter of the Green New Deal on every level. I think we really need it for our country and for future generations. In Ithaca, we need to get our power and our grid under state, if not city control.

We also need to expand our transit. So we need more TCAT stops, and we need them to be running more frequently. We need more buses. Electric buses. More workers who are driving these buses. And these workers are entitled to the union that they currently hold and we need to make sure that they all maintain union jobs. And we need to make it free. Right now. TCAT runs at a deficit. It's a service. We don't look at how much money the post office makes as a sign for if it's doing a good job, we make sure if the mail is delivered on time as a metric. We need to be doing that with TCAT. It's a service we need to provide to everybody because cars are not good for the environment, with their carbon footprint. Public transit also works better for the working class.

As for the environment, we need to make sure that we're retrofitting. We talk about retrofitting our houses so that we can reach carbon neutrality — all of our government buildings, but also all of our private dwellings as well. And we need to make sure that we're not doing this at the expense of tenants and even the homeowners because we can't let the climate crisis be an excuse to gentrify our neighborhoods, because if it costs money to retrofit the pipes, or to make sure that our buildings are carbon neutral, it can't come out of the pockets of the tenants and homeowners. We need the government to step in. There are a lot of folks who have been doing good, green renewable work in Ithaca. And a lot of what our job as city government is going to be is passing them the reins, asking them what they need to get the job done, and then providing that.

Q: Realistically, how much environmental change can Ithaca, population 150,000, affect with their Green New Deal?

A: If we do everything we can, it gives us a better argument and a better box to stand on, so to speak, when we are advocating for more aggressive action at the state, federal or international level. We are living by our values, as opposed to writing flowery rhetoric. That's where the Green New Deal is, for the most part right now: a lot of great words on paper that we need to add teeth to. A whole bunch of countries, including our own, have written very flowery words about how this is the fight of our lives, for humanity. But there hasn't been a whole lot of action. So I believe that politics comes from the bottom up, it doesn't come from the top down. We're pushing as hard as we can at the ground level to inspire others to do the same. And it will give us more legitimacy. When we are advocating that the representatives in Albany, Washington, and the UN are doing everything they can as well.

Q. Were you inspired in your platform or running for office by your experiences at Cornell, and how so? Were there any specific courses or professors that had an effect on your choice to run or on your platform?

A: I'm very grateful for the relationships and the experiences I've had, as a consequence of going to Cornell. I have some problems with the university and how the administration handles certain things, but I wouldn't trade those relationships and those memories for a second. I've had wonderful advisors and mentors, such as professors Hector Velez, Maria Cristina Garcia, David Bateman and Jamila Michener. Professor Kenneth Roberts, of course, he's my advisor. They've all taught me a great deal about our country's history. My people in particular, the Latinx community, the Puerto Rican community.

I've learned a whole lot about myself, my community, but also this country's history, and its present in terms of policy-making and political history. And I've used that information to help inform me of how to best draft and advocate specific types of policies that I believe are collective in nature, are universal, and are for the betterment of the majority of the people in our country, or at the very least, the city.

And I've had a lot of opportunities to organize. At Cornell, I was the campus leader for the Students for Bernie campaign during the Democratic primary for president. That group has since become Cornell Progressives, an organization I'm very proud to have been a part of for the past three years. And I've learned a lot from my friends in organizing, and learning by sitting back and watching how they speak, talk and act on a progressive vision for what our society could look like.

I don't think I'm particularly gifted when it comes to legislating, policy, or solutions. But what I am special in is the relationships that I have, and all the people who I've met here who are experts in their fields, who have years of experience, who have so much genius and potential, but also compassion. And they've shared that with me, and they’ve become a resource that I can depend on, and vice versa. And so I think that when I'm legislating or when I'm advocating for specific policies, I'm doing so with hundreds of people by my side, and and in my ear, and so I'm very grateful for that. And I think that's how politics should be. I don't think I have the right ideas, but I'm surrounded by a whole lot of people who have a lot of good ideas.

Jonathan Mong '25 is a communications assistant for the College of Arts & Sciences. 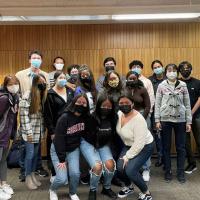